Do you love network traffic? Even I don’t, and no one else does. Would you like to waste your limited resources? No one would like it. Today’s post is dealing with better networking with Subnetting and classless Addressing.
Hi beloved readers. Subnetting is well known networking process used almost every middle and big organization to manage and design their network for best performance and error free.

Subnetting is the process of dividing a big network into smaller network. This process include inter domain classification of the address on different subnet mask. Big network is having too many disadvantages. Subnetting is great solution of all those big and small issues.

There are lots of disadvantage of big/large network, to overcome this Subnetting is done on these networks. Following are closest reasons of Subnetting. 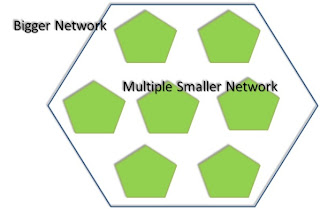 Reduce Network Traffic:
We all appreciate less traffic and congestion free network. In absence of trusty router most of the packet keep grinding the network and creates big traffic problems. With divided network and router, most of the packets will reside in local network until the destination is another network. So fewer packets will travel through router and router will be load free.
Also router is responsible for creating broadcast domain, smaller the broadcast domain we’ll have, less network traffic and congestion we’ll encounter.
Optimized Network performance:
Less traffic and less congestion result in greater and better network performance.
Simplified network management:
Being in smaller units, it would be far more easy to isolate the networks and easily identify the exact position of error in big gigantic network.
Great for WANs:
Since WAN is being wider, it is slower and more expansive than LANs. If one implement WAN in a single link, it would create problems as listed above. Considering smaller network will make the system more efficient.

As mentioned above, this is methods adopted by ISPs used to allocate the amount of address to a company, home user or say medium or big area user. They provide address in certain block size after Subnetting the one network.
One we receive such address, ISP provides us address like 172.168.10.15/16. What does it means, slash notation (/)tells us how many bits are turn on. It could be maximum 32 but we use largest subnet mask to /30 as rest we reserve for broadcast and host bit.

Subnetting is clearly great tool by network designer which still preventing the whole bunch of organization to utilize each and every IP also not to forcefully move to IPv6 because of lack of IP. Along with this, network management and performance is drastically increased for every larger network.
http://Inteligentcomp.com

Nerd Guide: What is Network Monitoring?