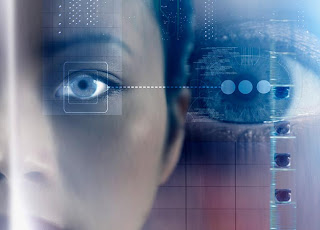 Starting from the 1966 movie BATMAN, retina scan was shown for the first time on-screen.
And the legacy continued with movie scenes showing a glimpse of retinal scan in Charlie angels, minority report and the latest Avengers. But what exactly is retinal scan.
All this is discussed in this article,not to be confused with another ocular-based technology, iris recognition.

Retina-scan technology makes use of the retina, which is the surface on the back of the eye that processes light entering through the pupil.
The principle behind the technology is that the blood vessels at the retina provide a unique pattern, which may be used as a tamper-proof personal identifier. Since infrared energy is absorbed faster by blood vessels in the retina than by surrounding tissue, it is used to illuminate the eye retina.
Analysis of the enhanced retinal blood vessel image then takes place to find characteristic patterns.

The idea for retinal identification was first conceived by Dr. Carleton Simon and Dr. Isadore Goldstein in 1935.
Retina-scan devices are used exclusively for physical access applications and are usually used in environments that require high degrees of security such as high-level Government military needs.
Additionally, retina-scan technology is still a prototype development stage and still commercially unavailable.

Retina-scan technology image acquisition is difficult in that the retina is small and embedded, requiring specific hardware and software.
The user positions his eye close to the unit’s embedded lens, with the eye socket resting on the sight. In order for a retinal image to be acquired, the user must gaze directly into the lens and remain still; movement defeats the acquisition process requiring another attempt.
A low intensity light source is utilized in order to scan the vascular pattern at the retina.
This involves a 360 degree circular scan of the area taking over 400 readings in order to establish the blood vessel pattern. This is then reduced to 192 reference points before being distilled into a digitized 96 byte template and stored in memory for subsequent verification purposes.

Retina-scan technology has its advantages and disadvantages.

Among its advantages are

Its resistance to false matching or false positives and the fact that the pupil
The retina is located deep within one’s eyes and is highly unlikely to be altered by any environmental or temporal condition.
Like fingerprints, retina traits remain stable throughout life.

Users claim discomfort with eye-related technology in general and the fact that retina scan technology has limited uses.
Retina-scan enrollments take longer than both iris-scan and fingerprinting.
Users claim discomfort with the fact that they must position their eye very close to the device.
Users commonly fear that the device itself or the light inside the device can harm their eyes in some way.
Many also feel that this retina scans can be linked to eye disease.
Retina scan has limited uses normally deployed in high security, low volume physical access situations in which inconveniencing users is an acceptable cost of heightened security.

I ASK ALL THE READERS TO GIVE THEIR VIEWS ON RETINA SCAN, IS IT GOOD OR IS IT HAVING MORE CONS THAN PROS ?
WILL BE WAITING FOR YOUR RESPONSE BEFORE MY OPINION .
http://Inteligentcomp.com