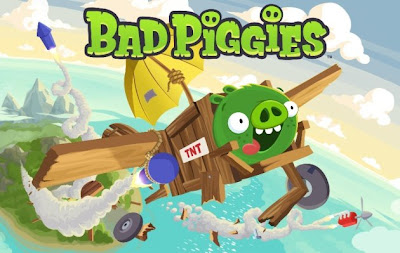 The fever of angry birds wasn’t over, those played once were playing it again, me too (played whole game twice) waiting what could be next?
Rovio entertainment came with the answer and the legacy continues but this time entered the world of birds are no wild hunting round birdies but pigggs!!!.“The ultimately cute and adorable pigs and really without legs”. These green pigs will adore you but as we know just like angry birds they won’t let you move your eyes away from the screen. Just hours after its launch Rovio‘s golden ticket to number one spot back in the app store.

These green hungry legless piggiesare just behind one thing which could end their hunger “eggs” shiny and healthy eggs. The plot is just about the piggies quest for eggs. They plan, they look for a map, they search and meanwhile all time in this quest of piggies you will go for a lot of thaccck ,thrasssh, kraak, snap a lot of falling and smashing stuff happens . Unlike angry birds piggies are not alone they got with themselves a lot of their stone age stuff with them , for once you will be thinking if you are back in Flintstones bedrock era . They got wagons, planes, all of stones and wood and not only this they got their whole inventory in which items get added at every level. Falling off a cliff, riding on a wagon of TNT or just the piggie’sgreeny chase of eggs.building of machines, to get to your goal and getting the maximum of stars. The amazing thing about the game is that at the end it will tempt you to start over again. Well, frankly you won’t find bad piggies to be connected to angry birds the only similar thing is the art work.
If you haven’t played it yet and just waiting for reviews, trust me it’s a must play. Bad piggies is the best game delivered till date by Rovio .
Thumps up for bad piggies 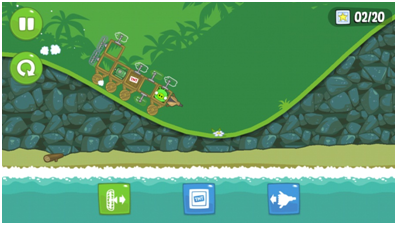